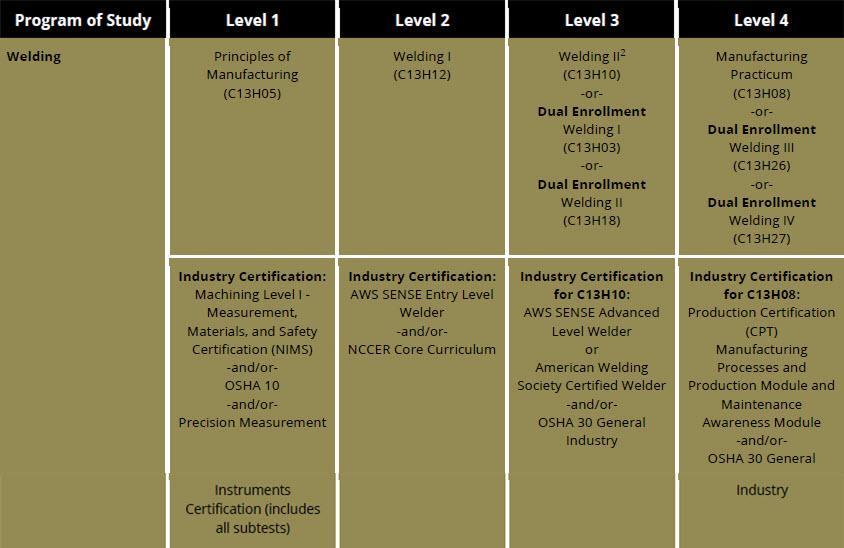 The Welding program of study is designed to prepare and certify students as entry-level welders. Students will learn safe practices, career exploration, leadership development, and basic arc welding and thermal cuttings skills. Basic arc welding and thermal cutting skills are developed over a series of two courses which will prepare students for an American Welding Society certification.

Back in 2011, Governor Bill Haslam announced six target clusters for which Tennessee had a competitive advantage and would focus its recruitment efforts to bring more businesses to the state. One of those target clusters was Advanced Manufacturing and Energy Technologies, and after several consecutive years of strong job gains, the demand for skilled workers shows no sign of slowing. Compared to the national rate of 5.2 percent, job creation in Tennessee is soaring in manufacturing fields, accounting for $30.2 billion in manufactured goods exported every year and a 9% overall increase over the last four years.Tennessee believes in the power of manufacturing. Over the last three years, Tennessee has posted the second largest percentage increase in the Southeast in manufacturing GDP, which reached $45.8 billion in 2015. That’s 16 percent of the state’s total GDP. With its attractive business climate and strategic location, Tennessee is home to a strong base of manufacturers representing many diverse industries, led by the state’s automotive sector, which in recent years has converted into a regional and national powerhouse. In industries such as these, employers like Alcoa, Eastman Chemical, Bridgestone, and Nissan are in need of engineers who can design, maintain, and operate complex production systems.
The Occupational Outlook Handbook developed by the Bureau of Labor Statistics lists the following occupations and related occupations for welders: Industrial maintenance mechanics, welding engineers, materials engineers, sculptors, welding inspectors, assemblers and fabricators, boilermakers, jewelers and precious stone metal workers, machinists and tool and die makers, metal and plastic machine workers, plumbers, pipefitters, steamfitters, and sheet metal workers. Welding courses are considered necessary by some pipefitter and steamfitter apprenticeship programs.
The nation’s aging infrastructure will require the expertise of welders, cutters, solders, and brazers to help rebuild bridges, highways, and buildings. The construction of new power generation facilities and, specifically, pipelines transporting natural gas and oil will also result in new jobs. National employment of welders, cutters, solders, and brazers is projected to grow 7 percent. Employment growth reflects the need for welders in manufacturing because of the importance and versatility of welding as a manufacturing process. The basic skills of welding are similar across industries, so welders can easily shift from one industry to another, depending on where they are needed most. Overall job prospects will vary with the worker’s skill level. Job prospects should be good for welders trained in the latest technologies. Welding schools report that graduates have little difficulty finding work, and many employers report difficulty finding properly skilled welders. However, welders who do not have up-to-date training may face strong competition for jobs.
Nationally, demand for welders will create over 12,850 job openings through 2024, the vast majority of which will arise from replacement needs as the current welding workforce approaches retirement. Despite this seemingly positive outlook, however, employers frequently report that they cannot find the skilled labor to fill available positions, which has held back the growth of domestic manufacturing even as it has recovered faster than other industries. This much-discussed “skills gap” seems to have disproportionately affected manufacturing: as much as 82 percent of U.S. manufacturers report moderate to serious shortages of skilled labor according to a Deloitte survey, and the U.S. Bureau of Economic Analysis estimates that the shortage could grow to 875,000 machinists, welders, industrial mechanics, and similar welding-related occupations if the supply of qualified labor does not keep pace. Given the current and projected industry needs, it is imperative to train the next generation of skilled welders to fill these positions and help drive the revitalization of U.S. manufacturing. It will be the job of welders and their machinist peers to manufacture the new products and perform the required maintenance in order for this much-needed upgrade to be realized in the coming years.
The TN Department of Labor and Workforce Development projects 570 openings for welders, cutters, solderers, and brazers from 2014 to 2024 with and a total of 9,210 employed in TN in 2024. This includes a state growth rate of 6.60 percent for welders, cutters, solderers, and brazers (51-4121) and 37 percent for welding machine setters and operators (51-4122). In northern middle TN counties in particular, welders, solderers, and brazers occupations are listed as a hot job. Tennessee is one of the top five states with the highest concentration of setters and operators in this field. Welders work in a variety of industries and with their skill sets they can easily transition among different industries.
In Tennessee, the production and refinement of metals, in particular, occupies an important sector of the economy. In 2012, there were 85 primary metal manufacturers and 1,000 fabricated metal product manufacturers operating in the state—both of which industry “clusters” were proportionally greater than the concentration of such manufacturers nationally. Meanwhile, Tennessee employees in primary metal manufacturing were represented at 1.43 times the national proportion. Additionally, Tennessee employees in this cluster enjoy a larger share of total annual wages compared with their peers elsewhere in the country, with a wage location quotient of 1.61.84 As previously stated, Tennessee demand for welders, cutters, solderers, and brazers is expected to grow 6.6 percent through 2024 (faster than the state average), resulting in approximately 570 annual openings.
Click Here to learn more by visiting the Welding Program Homepage